The Barbie Doll Foosball Table Brings Together the Gender Divide

The Barbie Doll Foosball table or “Barbiefoot” is the brainchild of the French designer Chloe Ruchon. Barbie seems to be everywhere nowadays, whether she is on a Barbie mp3 player or whether she’s morphing into a Birds Barbie Doll, there is no escaping her. The reason this product is called Barbie foot is because foosball tables are called babyfoot in France. Apparently now games that were meant exclusively for guys are now being taken over by Barbie too. This foosball table was developed with the collaboration of Leo Mattel and Babyfoot Bonzini.

the product was created in partnership with mattel brands consumer products
and babyfoot bonzini. 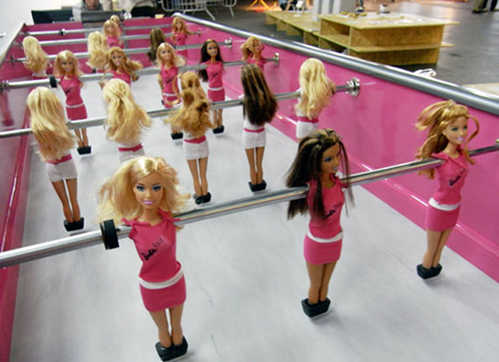 Most people think that this is a really weird idea, but I personally think its brilliant. It encourages girls to play foosball, and if you’re a guy, well don’t you think there are a lot of things to admire about Barbie? It’s the perfect way to get guys and girls to play together. It appeals to older people as well. So if you’re anywhere between the age of 10 and 50, you will most definitely love Chloe’s new invention. At least I think you will. 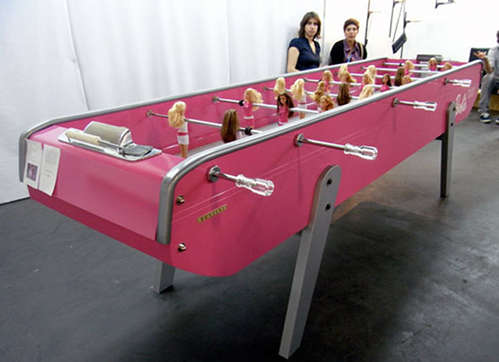 This table was unveiled at the DMY youngsters exhibition in Berlin earlier this year, and it is already receiving tons of attention. The only thing I can see that is a bit creepy about the table is the fact that all their arms have been removed and they have been replaced by poles, which gives them a bit of a zombie-like look, but it is quite