When it comes to apparels there have been experiments carried out in various ways. Designers have gone to great lengths to showcase their talent and imagination. Not only is the material cut and stitch in numerous methods, thereby creating a variety of dresses but also the material itself has been experimented with in several ways. We have seen dresses made out of animal skin, leather, paper, leaves and of course cloth. What else do you think could be next in line?

Give a wild guess keeping in mind that it is the age of technology. If you have guessed it right it is a dress using circuit boards. Nicky Assmann, an artist and a student of music, spent four months wiring up a Musical Circuit Dress. There are 35 circuit boards in all that have been stitched together to give it the shape of a dress. 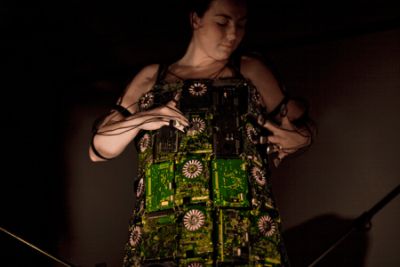 Assmann is said to have liked the look of the circuits and this led her to design a dress using them. In fact it is not just any ordinary dress just to be worn but serves as a musical piece as well. Making use of the concept of deliberate short-circuiting, a variety of sounds is produced. The twelve coils that have been incorporated into the dress can be played when one coil is connected to the other using finger copper plates. As mentioned the dress is made of circuits and when the fingers explore the dress musical, compositions are produced. And all these sounds can be heard from the two speakers installed on the front of the dress. For so many functions the dress needs to have a source of energy and this is provided by the batteries fit inside the outfit.

Like many other dresses designed by designers and showcased on the ramp, this one too cannot be included in ones daily wear, or may be could never be worn by anyone. This however, is an expression of a person passionate about technology. To put it in the word of Aasmann herself, “Clothing can be considered a second skin and by implementing technology in it, you are bringing it into your intimate space.” The idea of creating the Musical Circuit Dress was to bring to the forefront that part of technology that is considered to be ugly – the circuits.

Wasn’t this amazing? You can also go through LED Galaxy Dress and Geeky Sensible Clothing.