Check Out this Angry Birds Cake!

Anyone who has ever played Angry Birds is in love with the game. It is one of the most beautifully fascinating games I have ever played. To be honest, when I saw it, I was a bit skeptical about it. 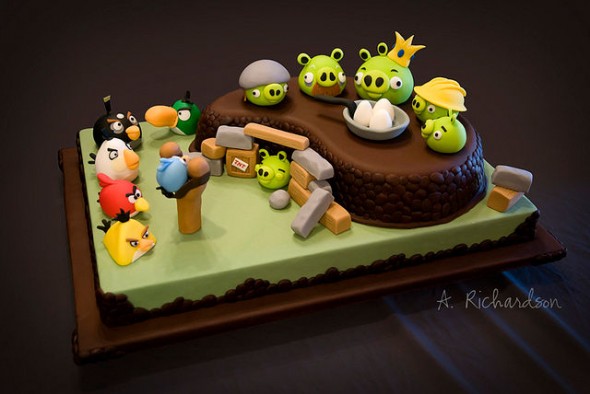 I mean of course what else would you expect from a guy who lives in the 21st century. We have 3D games now and if someone comes up and shows you a Pacman like game won’t you be surprised? But, after playing the game, I was extremely sure of the fact that it is one of the best-est ever games! And, I wish that it is released soon for gaming consoles with some upgraded graphics and stuff.

Anyways, on one side you have a popular game ‘Angry Birds’ and on the other side you have another very steaming phenomenon these days which is the cake making art. We have Yoda head cakes, Mickey Mouse cakes, Batman cakes, and even Wolverine cakes, but this one is something different. Basically, from the maker’s point, I don’t think it’s more difficult than making a Wolverine or Batman cake but if you talk about how neat the cake looks, then this one for sure tops the chart!

What’s good about this cake is that your complete flock of Angry Birds is there and all of the evil pigs are there too. But, don’t get too violent and start beating the hell out of those pigs. It’s a cake after all!

The base of this cake is made from dark chocolate and so is the hilly area on which the pigs are resting. I am not quite sure of the rest of the items so I won’t comment. One thing I would like to add here is that the cake overall looks extremely neat and yummy which is a very important aspect overlooked by most cake makers. Remember, the Green Lantern cake? That was a big messy cake but this one isn’t. This is one is cute, neat and yummy yummy! Wanna have some birds and pigs? Take out your knife and get ready for the ultimate battle!