Lewis Carroll’s Alice in Wonderland has opened doors of imagination and fantasy to people all over the world. Among its various interesting characters Mad Hatter is one of the most popular ones and Medicom seems to be too eager to create Johnny Depp as Mad Hatter Doll much before the Tim Burton’s 3-D fantasy Alice in Wonderland releases worldwide in 2010. 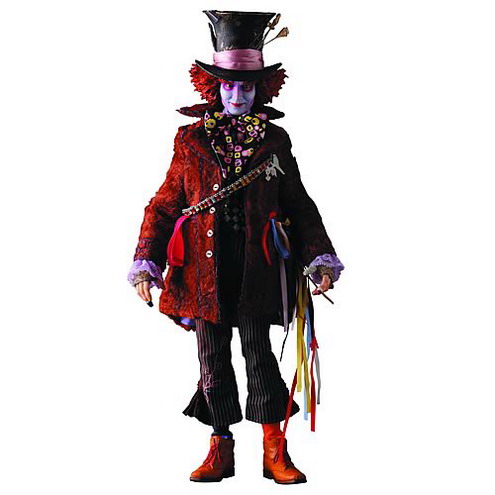 Lewis Carroll created all legendary characters with this one book about Alice’s journey into fantasy world. Hatter in fact got associated with madness because of the time wrap and trap he was caught up in the story and popularly became known as Mad Hatter – someone condemned to be trapped in his own tea party forever. Tim Burton’s 3-D movie will really make it all come alive because of added dimension and expectations are really running high. This Medicom’s 12 –inch Mad Hatter Doll gives a sneak view of Johnny Depp dressed up as Mad Hatter. Johnny Depp fans will surely love to add this doll to their collectibles.

Unfortunately Medicom’s Mad Hatter Doll will not precede the movie and will be released only in April 2010. It can be pre-ordered now for $199.00. Do check out other dolls inspired by Hollywood like The Alfred Hitchcock’s Birds Barbie Doll or Marilyn Monroe Bobble Head.