One of the marketing gimmick that has worked big time is teaming up things-that-are-most-talked-about with their original stuff.  To cite an example, I have come across tons of Hello-kitty gadgets and accessories, and they really do good business. Just like we have our blogsphere, there exists a parallel world called “Twittersphere” wherein people talk out their thoughts, things they do or want to do! 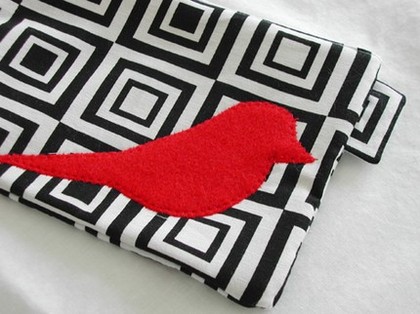 If the “sending-tweets” mania has got all over you, the Twitter Bird makeup bag is what you’d fall for. The smart cosmetic bag has painted the bird red instead of blue which could make you think about it.  It comes for $5 and is just nice to keep your small stuff together. In case, you’re hell bent about the blue paint, you could make one yourself. The maker has been benevolent to give away its DIY instructions.

If you’re looking for more options for a pouch, you should check the Floppy Disk Pouch and the Underwear Purse we spoke about earlier.