If you have ever watched a bad horror movie in recent years, it’s likely that you recall a scene where someone attempts to call for help on their cell phone only to find out that their battery just died. It probably didn’t end well for them, but it can for you, thanks to this Solar Fan Solar Charger. The design may be quirky, but you won’t be saying that when you harness the sun as your back up power source. 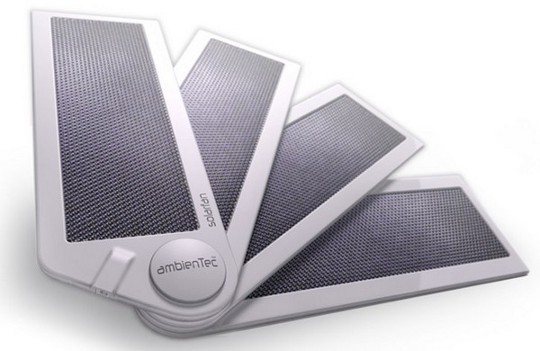 As you might expect, the Solar Fan is a high end electronics accessory that folds out easily into the charging position. No matter which pattern you decide to lay it out in, you can charge up enough juice fron the sun in 10 minutes to provide your phone with three minutes’ talking time. I would have to believe this depends on the model of your phone, however, as newer smart phones tend to need more juice than your smaller  and simpler counterparts. Still, the Solar Fan can connect directly to a number of different mobile headsets, and it comes with everything you’ll need to have your own portable power plant. The fan only weighs about 186g, and the charger output is DC5V. It also includes the cable, USB cable, AC adapter, pouch, tripod, charger, and two AA batteries. Of course at a price of $405 USD and an additional $23 in shopping costs, they should throw in everything but the kitchen sink.

If you happen to be a big fan of solar technology like I am, consider some other sun-powered gadgetry here on Gadgether. You can plug in your calculations on the go with this Ultra-Thin Solar Soft Bean Calculator, for example. Alternatively, you might be thinking a little bigger with this Solar-Powered Fridge that was invested by a British Student. I would love to see one of those in action.