While I have no doubt that the fanbase for the Star Wars movies, books, and video games skews towards the male side, there are still hundreds of thousands of female fans of the galaxy far, far away as well. If you happen to be one of those among the ranks, we have put together a short list of Star Wars stuff that any female fan will enjoy. 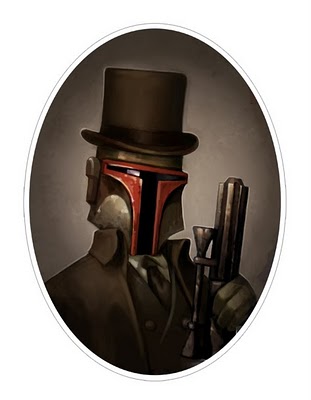 As a guy, I generally consider the Star Wars Universe to be full of badass things like Jedi, Sith, all sorts of super-powerful space hardware, and the like. Yet if you look beyond the surface, there are also some things that are a bit more refined than the brutishness of intergalactic combat. These Victorian Star Wars Portraits, for example, take your average bloodthirsty killer and turn then into upstanding gentlemen and ladies. I have to admit the throwback looks is rather hilarious, but C-3P0 is my personal favorite. The question is, could you really get Boba Fett to wear a top hat? I get the feeling he wouldn’t be into that sorta thing, since he’s mostly busy being the most feared bounty hunter in the galaxy and all that. 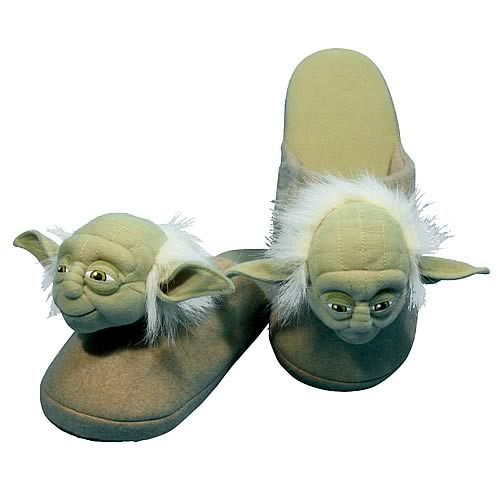 Couldn’t we all use a little wisdom from the force when we first wake up in the morning? Yoda’s calming presence can now get you on the right side of the bed with these Star Wars Slippers. If there are days where you feel like force gripping someone to death, the dark side is also an option as they include a Darth Vader pair of slippers as well. Admittedly, the dark side doesn’t look nearly as comfortable, but at least your family will have fair warning when they see the Darth Vader booties come out. That’s when you know it is time to take cover. 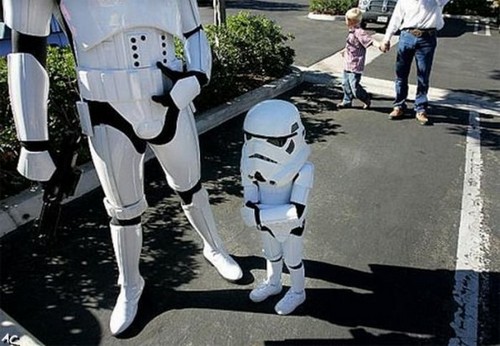 Whether you are a guy or a girl, there’s no question that dressed up little kids are downright adorable. These Star Wars Babies are a testament to that fact, and the costumes are perfect. As you might expect, Yoda is a popular character for parents to choose, and my oldest brother dressed up his newborn son as Yoda for Halloween recently. Other characters are around as well, though, from this mini Stormtrooper to the mighty baby girl Chewbacca. I’m not sure if I would be proud to be a baby Chewbacca when I grow up, so the parents might want to hide that one away for their own enjoyment. My nephew also went to a recent convention as General Grievous, and he was the life of the party there. Little kids in Star Wars getups are just that much more awesome. 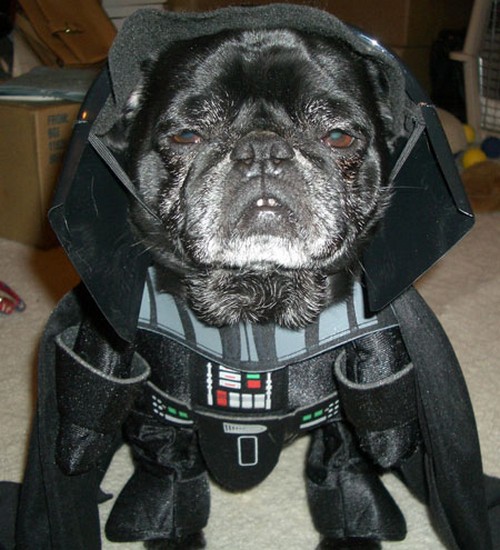 My cat is so old and grumpy these days that I seriously doubt that I could get her into a Darth Vader costume, but there are more tolerant animals out there, it appears. These cute animals dressed up in Star Wars costumes are hilariously cute, and they run the gambit in terms of characters. The black pug dressed up was Darth Vader is my personal favorite, if only because he or she looks like they know they are going to be the subject of much humiliation, and are really just waiting for the biscuits to arrive. I’d also like to know how they got that cat to wear a Yoda costume, and why said cat couldn’t put on a less “I’m going to kill you” expression when they did so. The Collie dressed up as Princess Leia also gets some serious points for greatness. 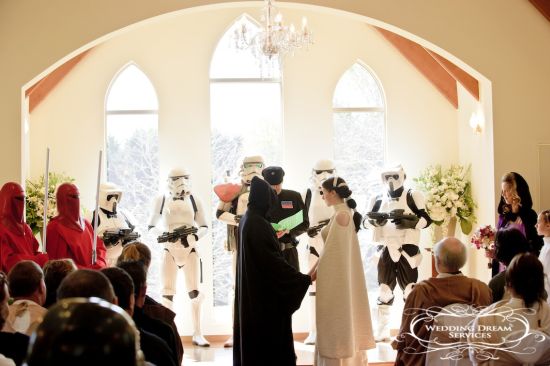 While I am sure there are plenty of guys out there who would entertain the idea of having a Star Wars themed wedding, the number of female participants willing to do the same is rather low. Still, these brave souls managed to get everyone together and dressed up for this wedding from a galaxy far, far away, and the array of characters present is staggering. I wonder how their Aunt May took it when she showed up in normal garb. Only the most hardcore of Star Wars fans would make the one day they get to celebrate the rest of their life in such a fashion.