Geek and Overweight are two words that are often heard together. Lack of movement, irregular schedule, and tons of junk food make a geek overweight. However, in the present scenario, the issue of overweight is seen in three out of five people. The weight problem is spreading rapidly because of the present unhealthy lifestyle.

Losing weight is not an easy task. Strenuous workouts, crash dieting, and prolonged yoga hours. These boring things make the process even more stressing. In order to bring back your interest in losing weight, have a look at the amazing weighing machines mentioned in the article. These machines would not only trigger your interest and help you keep a check on your weight but would also make a style statement.

Have you ever imagined standing on thousands of pins to check your body weight? Sounds crazy right, but here is “Excruciating Pin Weighing Scale” designed by JimRuck and made up of thousands of excruciating pins which are the main component of this weighing scale. These pins will allow your body weight to be distributed evenly across the bottom of your feet and will show you the exact weight on the monitor. This weighing scale is definitely unique and will enhance your room décor, too. 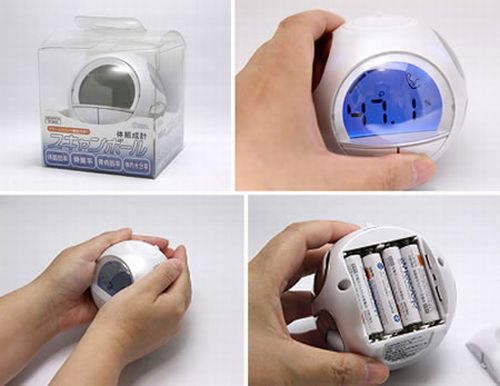 If you’re fed up of those heavy weighing machines and want something simple to keep a track of your weight, then this “Body Check Ball” is a good option for you. You just have to hold this ball in your hand and the pair of electrodes in it will do the work. The scale will give you pretty accurate account of your body. 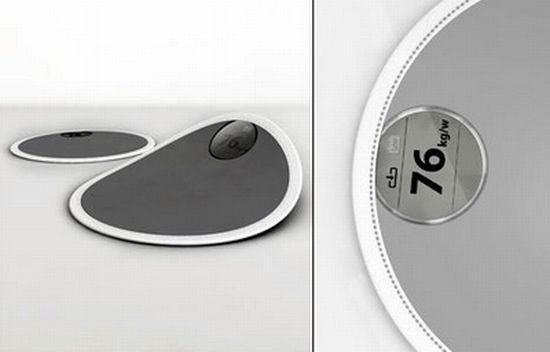 Forget all those heavy weighing scales which are trouble to carry and store, for here is “Paper Weighing Scale” designed by Duck Image Studio. This scale is very lightweight and flexible enough to be rolled away for storage. You can leave the Paper Scale out on the floor through the day since it is waterproof and can be easily cleaned. 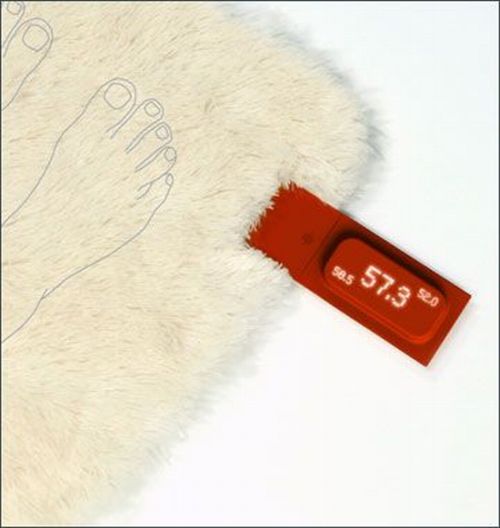 Are you bored of those normal old fashioned weighing scales and want something new and different? “Rug Weighing Scale” is perfect for you. This weighing scale is a rug that comes fitted with a digital glowing scale that will show your previous weight, present weight, and goal weight. You can also detach the rug for cleaning or attach a new one as per your taste. It’s definitely much more cozy and comfortable than the traditional ones, but sadly it’s just a concept yet.

Discover your Weight, digit by digit 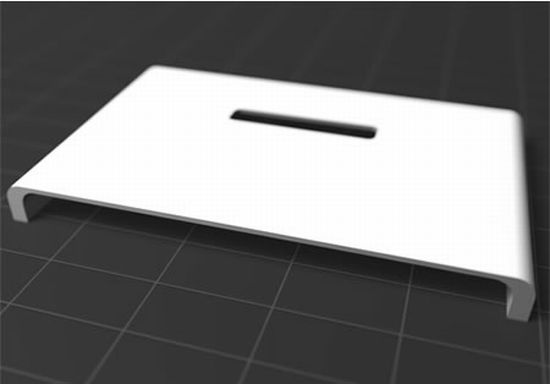 Mac Funamizu has designed this weighing scale that projects the numbers through a strategically placed slot on the floor below. The projection is in such a way that no one can peep above your shoulders to catch a glimpse. So if you don’t want to reveal the numbers simply place your foot above the slot and slowly drag your feet away to see the number. 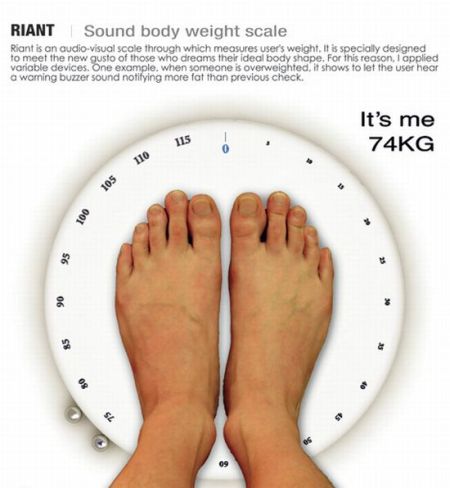 “Riant Weighing Scale” is designed by Daum Gano and has got different way of measuring your weight. This is audio-visual scale, which has got smart pendulum system to check your weight. All you have to do is grab the pendulum that manages your weight, put the other pendulum on the point to which you want to cut down or where you previously checked. Now rest two pendulums and stand on the scale, you will see the pendulum moving and it’s sounding to notify your weight change. Wait for pendulums to stop to find your final weight. Isn’t that an interesting way of checking weight? 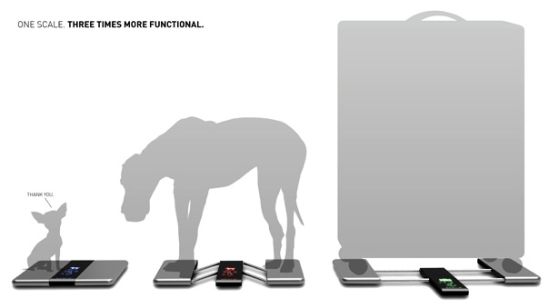 It’s impossible to check the weight of your dog or luggage on your normal weighing machine on which you check your weight. So what’s the solution for it? How about having a sleek scale which will expand its base to accommodate anything from a small sized pug to a human being.  Say hello to “Scale Z”, which besides its stunning physical attributes, is capable of recognizing your feet and showing your past records such as weight, BMI, etc. It also records new reading and compares it with your previous weight, then shows weight gain or loss by changing its screen color and type. It will also send your readings to your computer via Wi-Fi.

“The Toilet Scale” is the weirdest weighing scale. It is actually a toilet sit which is to be placed on the toilet pot, so that whenever you sit on it, it will show you your weight. While the scale is measuring the weight you have, make sure your feet aren’t touching the floor or this scale won’t work. 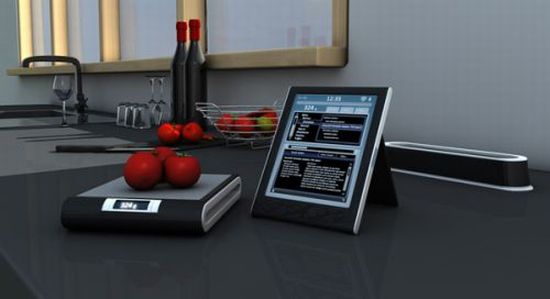 The “Diet Mate” concept is designed by Turkish artist Serdar Sisman. It involves two panels and a dock. One plane is a little bigger than the other, and is used as a weighing scale for your food. The weighing scale is digital and can be easily stored in your kitchen and be used anytime. The second panel is a sleek tabletop design that has a display on it and is the brain of the whole operation. The panel can also guide you on the combination of foods with which you can get maximum health benefits. 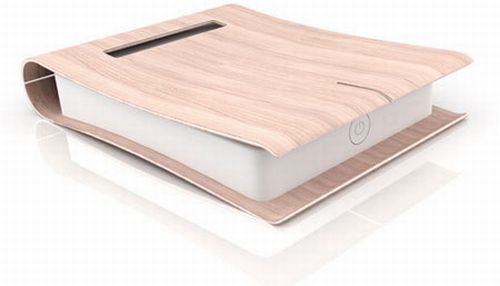 Are you among those people who are obsessed about their weight and get easily worried when you see the extra gram on your weighing machine? Then here is “Vage Scale” which appreciates your emotions and sensitivity. The best part about this scale is it avoids showing each grams and display swings in red or green area to show vage convergence to the entered ideal weight. This “Vage Scale” is made up of plywood which gives it a look different from the normal glass or plastic machines. 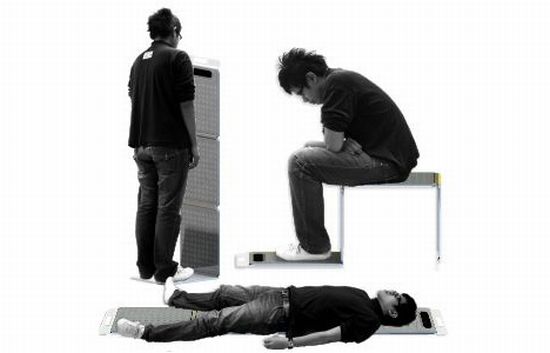 This “Universal Weighing Scale” is perfect for people with disabilities or even diseased patients. The scale unfolds to all shapes and sizes to make weighing much more easily. You can stand, sit, or even sleep on it to measure your weight. 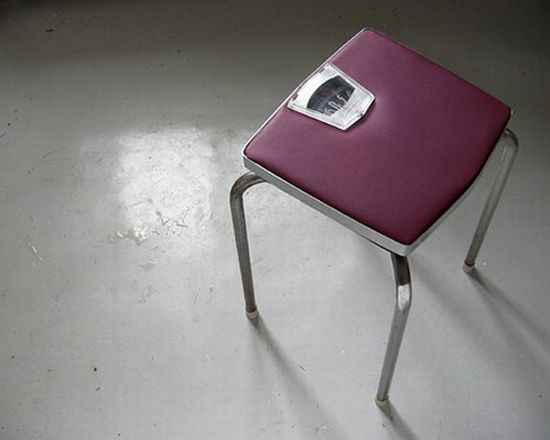 This “Weight Seat” is for those extremely lazy people who want to lose weight but are too lazy to stand up and walk to the scale. With this scale, one has just to sit on his or her butt and the weighing seat will show the weight on the LED screen. This weight seat is great while having meals as you come to know the exact amount of food you are eating.

Standing on a normal weighing scale and reading your weight, especially when you have bad eyesight is very difficult, and you know that every small movement tends to give you an inaccurate reading. But now, you don’t have to struggle to read your weight with this “Taylor 500 Pound Projection Scale” which makes the process a lot easier. This scale is capable of projecting your weight onto the wall with red projection, wherein the height can be adjusted and the focus wheel has been included to make the image sharper. 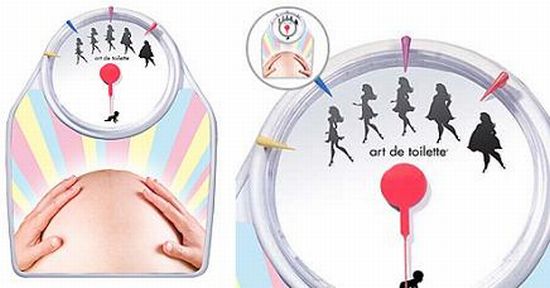 No woman can be happy if her weight is going up, except for a pregnant woman. Although the gained weight will be a trouble later, it is important for providing sufficient nutrition to the baby. This scale measures your weight by showing pictures expanding waistline spaced at 20 pound intervals.

Weight Scale with a Spin 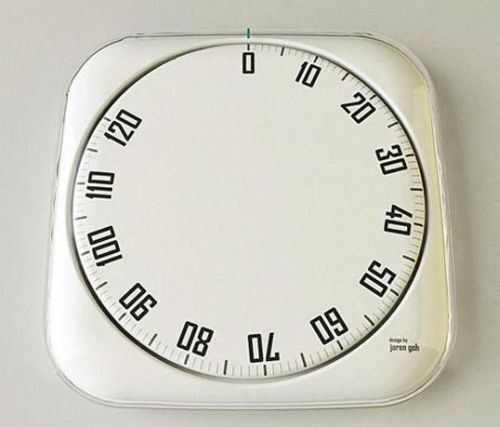 Watching your weight go up is quit disappointing and how depressing it would be to watch it in your same old, boring weight scale. Now add a little fun with this “Fullscale” weighing scale design which is quite different a concept. Instead of separating the display and the foot rest region, designer Jaren Goh has combined them into a singular and harmonious feature. The scale shows the whole dial and functions just like a normal scale but produces a different experience. 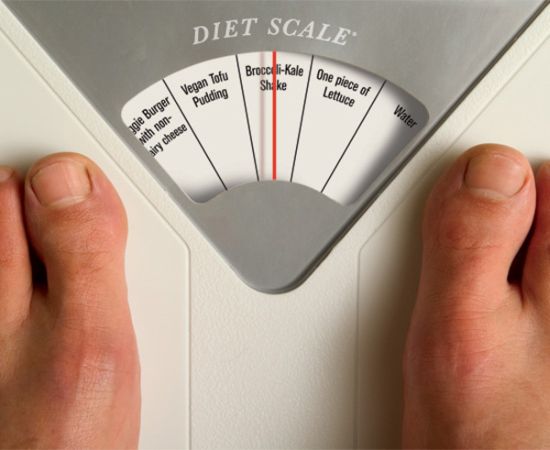