This is a really cute web cam which is definitely different than anywebcam you seen before, for it is actually able to record and create 3D video, which is a definite for hours of chatting and video capture. 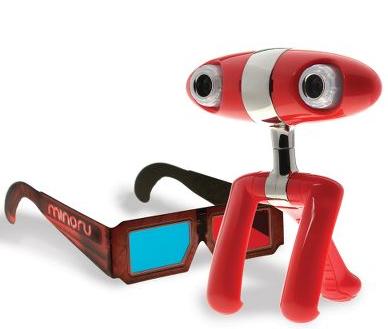 Shaped like some cute pet we could only wish to own, this 3D webcam is made with two separate video cameras able to record video at 800×600 resolution with 15 frames per second. It hangs on your monitor with its arms and legs, and plugs straight to your USB, so no difficult connection needs to be found.

By the use of the two separate cameras, it records two slightly different angles and then pastes them together to make 3D video as seen in those fun 3D animated films. Your next question is probably: ‘Don’t we need those special glasses?’. The answer is yes, but with each one of these cameras, 5 pairs of the special 3D glasses are provided.

I don’t know about you, but this 3D web cam seems like a really fun web toy to own. It is available at Hammacher Schlemmer for only $99.95