Keyboard skins for Macbooks and Apple Notebooks from iSkin

iSkin has launched several types of keyboard skins for Macbooks and Apple laptops, that look and feel amazing and are definitely useful accessories for these notebooks. So often, we sit around working or surfing with our laptops on our laps, and not only multitasking on the computer but also other than that. 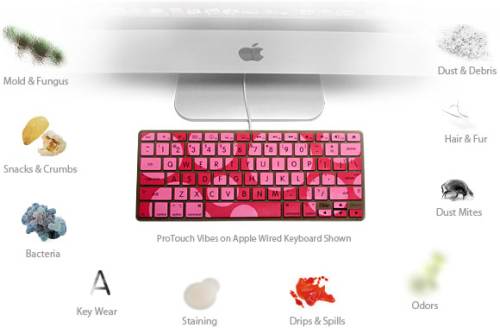 Laptops Designs are made for comfort while working, so we end up feeling very comfortable and careless with drinks and food around the laptops, which do spill over. Dust which is everywhere gets on to and in to gadgets very quickly. To help avoid this iSkin has launched their new and improved range of skins for keyboards. The new skins are called ProTouch Classic, ProTouch FX, and ProTouch Vibes. All of these skins have their own special features and some common features.

Some of the common features of the ProTouch protectors are extremely protective offering advanced protection from dust, debris and microbes, provide comfort while typing and can be easily washed. They can also be used for aluminium wired or wireless keyboards.

Take a look at the entire gallery below iSkin skins for Macbooks…with the different designs:

– The ProTouch Classic which is translucent and clear, highlights the characters clearly and fit the keys perfectly.

– The ProTouch FX has LED backlight, night light which glows and colored key combinations of Red, Black and Purple with glow white.

– The ProTouch Vibes gives you more command and control with shortcut characters on keys, dual tone color and large fonts of characters which makes it more appealing.

Read about their specifications at iSkin.  All I can say is I hope they customize it for other laptops at the earliest!