In the summer of 1945, a German doctor sprained his ankle while skiing on the Bavarian Alps. While recuperating, the doctor found his standard-issue army boots too painful to wear. This inspired the doctor to redesign his army boots with soft, comfortable leather and cushioned soles. The name of the doctor was Klaus Martens and his redesigned army boots came to be popularly known as Dr. Martens.

To celebrate the 50 years of the iconic footwear line, Dr. Martens has released a USB flash drive that should appeal instantly to fans of the premium footwear range. The ‘Dr. Martens 50th Anniversary USB Flash Drive’ incorporates similar design elements that have made its boots a chic fashion statement. 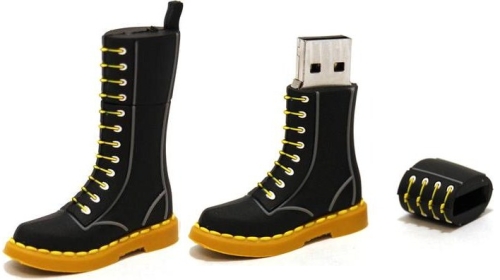 For over five decades, Dr. Martens has produced footwear, clothing and accessories that are extremely comfortable to wear. The footwear range of Dr. Martens is their flagship brand and incorporates distinct features such as air-cushioned soles (AirWair), and bright yellow colored stitching on top of the soles. The calf length army-designed boots is a popular fashion statement among Skinhead, Punk, Grunge, and Goth subcultures as well as some youth subcultures. With its eclectic colors and renegade fashion style, it is easy to understand why the boots have a following among the non-conformists.

The special edition 50th Anniversary USB stick released by Dr. Martens should appeal to the non-conformist in you as well.

A miniature Dr. Martens boot forms the protective covering over the USB circuit. The miniature boot has a smart black color tone with grey articulated lines on the border of the boot.  Gold colored buckles adorn the front of the miniature boots. They are arranged in a row beginning from the top to the neck of the boot.  The sole is colored yellow with the trademark Dr. Martens yellow colored stitching on top of it.

The USB has a cool design feature that is worth mentioning. With the cap on, the USB stick resembles a knee-length boot. If the user removes the cap, the flash drive then resembles a calf-length boot. So, the user gets two boots (figuratively) for the price of one USB stick.

Apart from its chic design features, the Dr. Martens USB stick is a highly functional computer accessory as well. It can hold up to 2GB of your music, photos, videos, or documents.

If you are a fan of Dr. Martens, then their 50th anniversary USB drive is definitely a cool add-on to your collection. It is priced at $25.

Also check out USBee and USB Flash Drive Lock to know more about such gadgets.