I have always wondered whether zombies retain some of their finicky taste buds once they are converted into one of the mindless undead. Considering how they are generally shambling around in no particular direction and attacking anything that moves, I would lean toward no. If you’re a discerning zombie who wants their brains to have the propper seasoning, then these brain salt and pepper shakers are for you. 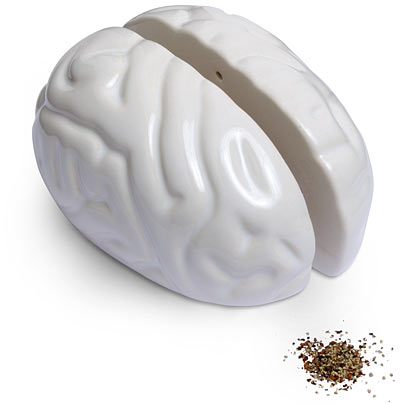 These two little brain halves are created from ceramic and measure 6.0 x 8.0 x5.2 cm. Most zombies may not appreciate the distinct flavor of properly salted human brains, but you aren’t just any ordinary zombie! If you are worried about losing one of the two brain halves while chasing down the living, not to worry. The shakers come equipped with a magnetic clasp that helps to hold them together. This makes them easy to pull apart, but decreases the chances that you will lose your pepper hemisphere at the worst possible time. At a price of $9.99

, it won’t break your zombie bank, either. Do zombies use USD currency? I have no idea, but if so, the price is right. Besides, as the manufacturer points out, no zombie worth his salt would go without one of these sets! I agree, that pun is pretty painful, but you can’t argue with the facts here.

The brain salt and pepper shakers would also make a great gift for zombie themed events. If one of your friends were crazy enough to have an undead wedding like the one featured in our 18 Craziest and Most Bizarre Wedding Themes post, for example, this would be perfect! If you think that you would prefer your salt and pepper to come out of something that doesn’t resemble an organ, consider these WMF Two-in One Stainless Steel Salt and Pepper Cylinders.