The K-Box Makes Any Surface a Speaker

It looks like a simple, trendy cell phone, and is just about the right size to carry around. I am sure all you music lovers and gadget geeks out there know what it is?  This curiously simple looking portable device is being promoted as a personal music device by Kerchoonz. It is called the K-box and it is a transformer. The K-box transforms any surface you place it on into your own personal speaker system, so you can enjoy your MP3 Player anytime, anywhere, without having to plug in your head phones and juggle with all those wires. 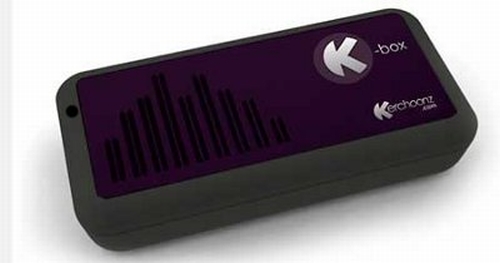 If you already know about these personal music devices, then you would have come across some of the predecessors of K-box. Most of these devices like the Soundbug, the Qvoix, the Nimzy Vibro Blaster and the S3i sound drivers, work in a similar manner and are still available in the market. Then why do we need K-box you may ask?

Well, for one, it looks very hip, is the most easy to carry around and functions without any hassles. But mainly because it is based on a new technology which utilizes the hydro gel based suspension system, and it performs better owing to the new improved dynamics, outputs, bass performance and a lasting battery life. It can be recharged using a USB and can be plugged into any other device you want to via the headphone jack.

If you are still not convinced then take a look at how the K-box converts any surface into a great speaker in the following video and then go ahead and grab a K-box and share your music with everyone!