The Bucky Magnetic Balls are Creative and Addictive

We all grew up playing with building blocks and creating a variety of structures. The Rubik’s cube puzzled us and the Rubik’s 360 ball set our heads spinning.

The Sticks and Balls game helped in creating numerous combinations. Once grown up, toys get left behind as they fail to grab our attention. But not anymore. Bucky Balls is a brand new game created for grown-ups to tickle the child within.

Bucky Balls – quite an unusual name for a toy. No, it has nothing to do with carbon atoms. The carbon atoms in this fullerene have been replaced by 216 rare earth magnetic balls thereby giving birth to Bucky Balls. The spheres being magnetic always stick together but at the same time can be pulled apart to create innumerable combination. You can create puzzles, structures, magnetic jewelry, games, shapes and patterns and the list goes on. All that needs to be done is to rack the brains a little.  In fact at times you don’t even have to do anything. Just a slight push here and a slight pull there and a brand new image is ready. 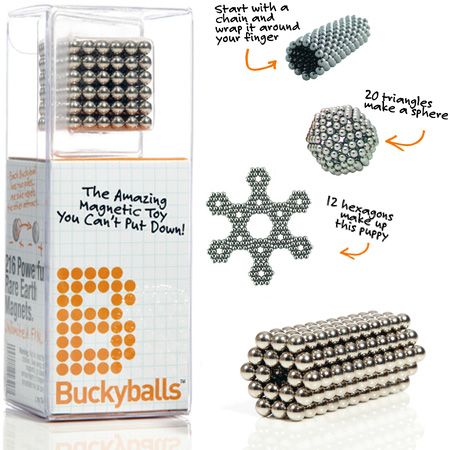 One amazing feature of this toy is the fact that it stands out from among the various new age toys. It is a fact that most toys created in these times are electronic ones. They use some other source of external energy. This is not the case with Bucky Balls. The only energy that it requires is the one produced by one’s brains and passed on to the hands. The hands do the rest of the job. Once you have a Bucky Ball set in your hand, the hands will start moving automatically and shapes and designs will start coming one after the other. It’s as if the hands also turned into a magnet and the balls stuck onto the hands. No wonder the slogan on the box says ‘The Amazing Magnetic Toy You Can’t Put Down’. So true. In fact you can get so addicted to it that you won’t even mind sitting while watching some other person play with it.

Original Bucky Balls are available in a steel finish. It is also available in three different shades – gold plated, silver plated and a black one which is nickel plated. The plated ones cost a little more than the original ones but can be worth the cost. As a wise decision, the makers of Bucky Balls have provided a small carrying case inside the large packing. They know that once you own one you will have to carry it with you everywhere. No other toy can ever get your attention once a Bucky Balls set is placed on your desk. It is available at the price of $29.95.

Take a look at iPhone Magnet and Light Magnet to learn more about such toys.