The Interactive Projectors for Legos

Intel has been teaming up with Kinect style 3D cameras of late. With the use of object recognition and projectors, they have successfully come up with a system that does all the imagining for you while playing or tinkering with Lego.

The system is called OASIS and its expansion is Object Aware Situated Interaction System. They use cameras that detect both depth and objects; for instance, OASIS can tell you where your hands are and what else is on the table. Based on what you are up to, the projectors pitch into add specific effects. 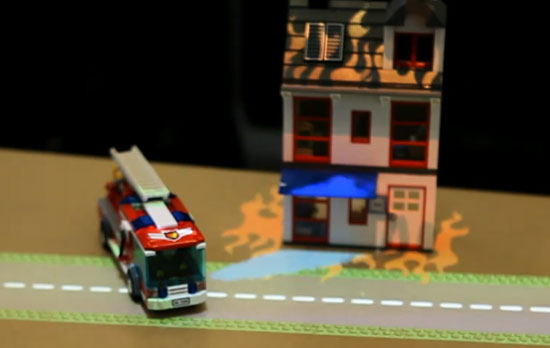 When you have fun playing with Lego and Oasis, watch your Lego dragon get close to your dog, or watch your house being set on fire. Give vent to your imagination and bring out your Lego fire truck to put out the flames.

In the meantime, watch your Lego figures run frantically from pillar to post, trying to evade the blaze, and walk right into the wide open jaws of the Lego dragon until a Lego aircraft carrier appears to blast it all out.

You would not even need your imagination to run riot while playing with Lego anymore. Just set the pieces together and Oasis will do the rest! Even if you wanted to imagine differently, it cannot be easily done, as Oasis projects its interpretation on to the table.

The use of digital camera and projectors to create a 3 D interactive display is not new technology at all. It’s just that the developers from Intel have designed a new way of utilizing this. The kids can have fun placing their Lego structures on to the specified screen and the system tells them what they are and provides digital graphics that interact both with the kids and their Lego structures.

The dragon when placed on the screen starts to spurt fire. Place this fire breathing dragon near the house and it catches fire instantly. The system provides digital renditions of Lego models in case they are not available.

Have hours of fun with your kids playing with these interactive projectors for Lego. It helps amply in boosting their imagination and keeping them occupied too. It’s an amazingly fun way of indulging your kids. They learn to be trendily tech savvy too. You never might know, in the process of playing, it can spark off creative and ingenious thoughts in your child and a true genius might be in the making!

If you too are a fan of Lego, you should take a look at Lego Brick Alarm Clock and Lego Storage Heads.