Guns never lose their charm. They were every kid’s fantasy in the past and as time progressed, are still going strong in the craze department. G.I. JOE toys were famous then and Schwarzenegger inspired Terminator mock- artillery are the fad now. This is perhaps why Firebox.Com is marketing the latest upgradation in the world of play-combat arsenal – the Nerf Raider. 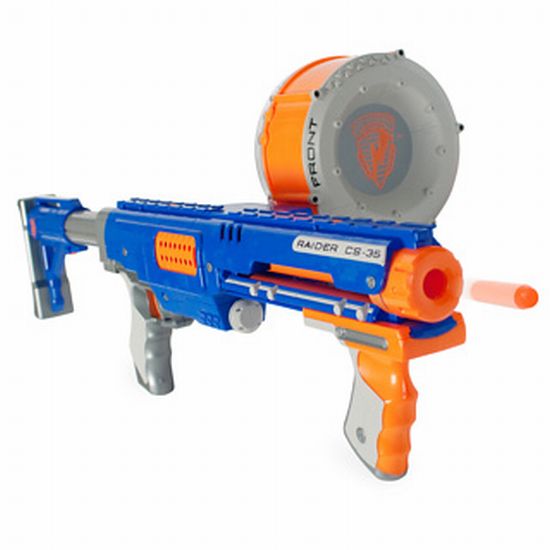 A rapid fire artillery unit with a drum clip that holds 35 darts, the Nerf Raider is a mock-combat weapon that any G.I. JOE and Terminator fan would love to own. The shape of the weapon might be a bit askew, but there is nothing askew about the way the gadget is supposed to function or the way it actually functions.

Powered by a tactical rail for any further attachments and supplemented by an assisted stock for comfort, the Nerf Raider can be modulated in such a way that if a person using it wants to dispel a continuous barrage of darts, he can do so by sliding the slamming fire handle uninterruptedly while simultaneously holding the trigger of the raider. As regards to the tactical rail and prospective attachments that can be made, the tactical rail is compatible in most other Nerf strikers marketed by Firebox.com, thus making it easy for the user in case he wants to try out a different attachment combination. 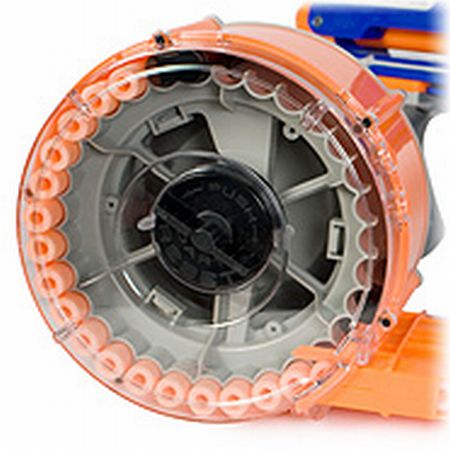 , equivalent to 34 Euros and $47; the Nerf Raider is one mock-combat weaponry that any combat fan would want to own. The Nerf Raider is compact, measuring around 70 cm lengthwise, 30 cm heightwise and 24 cm widthwise thus making it easy for the user to tote it around while indulging in a serious mock-battle – Hollywood style.

The only couple of safeguards that need to be maintained while using the Nerf Raider are that the weaponry is not for kids below the age of six as the pellets bear a choking hazard to youngsters below the specified age and that the pellets should not be aimed – under any circumstances – at the eyes or faces.

Apart from these two safeguards – mentioned primarily by Firebox, the Nerf Raider is a perfect solution to all the problems faced by mock-combatant professionals. Now, the time has come when pellets will fly and opponents will be thwarted and terminated just by the slide and flash of a trigger; John Rambo and Terminator need not just be in television anymore, they are out here – on the neighbourhood backyard.

If you wish to keep track of fun gadgets, don’t miss out on V Cube: 7 SuperCube or the Bucky Magnetic Balls.