Outdoor Transistor Radios: Life-like Replica Of A Ladybug and An Owl

With the advent of iPods, laptops, and mobile phones, Transistor Radios would seem like something that have belonged to the Victorian era. Well, these adorable ladybug and owl outdoor transistor radios are very much back in fashion!

And if you’re a fan of Outdoor Transistor Radios, these various animal-shaped ones are the latest and the best to own! 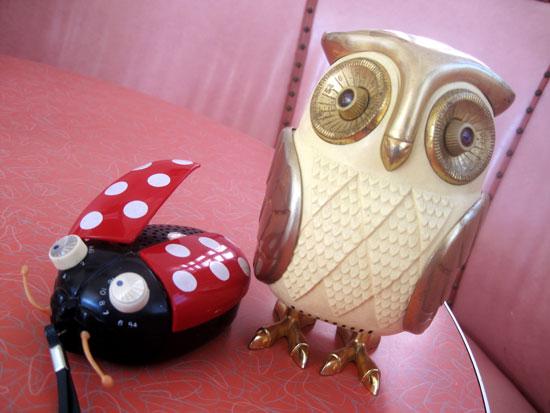 Designed by the company Sonnet British Design and made in Hong Kong and Japan, these particular animated looking animal transistor radios are owned by Allee Willis. Unlike our previous iJerry Vibration Speaker and iMo Resonance Speaker which cannot transmit, these surely can do the job. While it is possible to own an entire collection of various animal shaped outdoor transistor radios, these ones have been shortlisted as favorites; and they have certainly lived up to their high reputation.

When the ladybug’s eye is twisted, it exposes her wing, as if in flight to reveal a speaker and when the owl’s pink rhinestone eyeball is twisted, it will belt out songs from the radio and with these babies, you don’t even have to worry about changing any batteries, because the owl’s batteries have not been changed in twenty five odd years! Both don’t only work properly, but they are adorable to look at. The ladybug is made entirely out of plastic, about an inch and a half tall with a wrist strap and rubber antennae for decoration; while the owl is eight inches tall, and has a plastic body, golden eyes, wings, talons and speakers over its feathery behind.

So, don’t think twice before picking up these excellent quality, vintage transistor radios!