Rich Russian culture – their aristocracy and their nesting dolls never go out of vogue (and this shows they have outlived the communist era). Renowned French Designer Christian Louboutin has created a Russian Nesting doll handbag for the Chanel Pre-Fall 2009 Russian themed collection. This cute doll is so deceptive that is looks like some personal rare Russian collectible doll. That’s the true rare exotic appeal of this designer purse – a never before design concept. 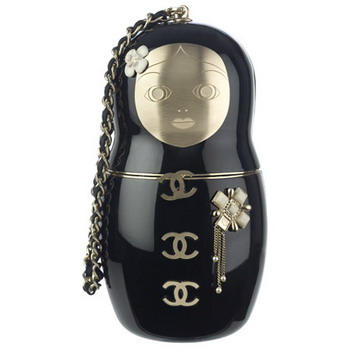 This haute couture bag is black in color and is shaped like a Russian doll. The three Chanel logos in the front are the buttons, a white flower and a bow adds the extra feminine touch. The handle is a simple silvery chain. This designer Russian doll handbag should be on sale in July itself and is expected to cost £2,500. Cost of designer labels is also a style statement for celebrities. 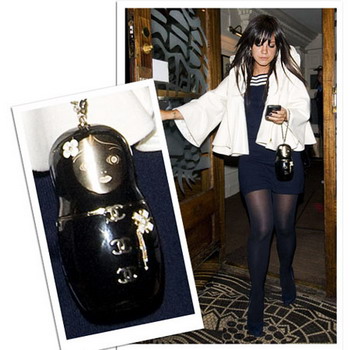 Of course not all celebrities have to spend on these designer accessories, some are lucky like British singer Lilly Allen, who it seems has been gifted one by designer Christian Louboutin himself. It looks quite different and stylish on her. Girls always love dolls, so they would love to carry this Russian Doll around!