Your kitchen is an adventure zone and you are somehow prone to gallivanting off on epic journeys while preparing Star Wars meals; You don’t just serve food … you dish out a way of life!

Everything you own somehow represents your quest for galactic domination and you are prepared for any battle.  Being blessed with womanhood, however, you know that the best way to defeat all your enemies is by winning them over dinner.  The most direct way to hearts are through tummies!  Wield these Star Wars kitchen gadgets and enjoy certain victory!  It tastes good! 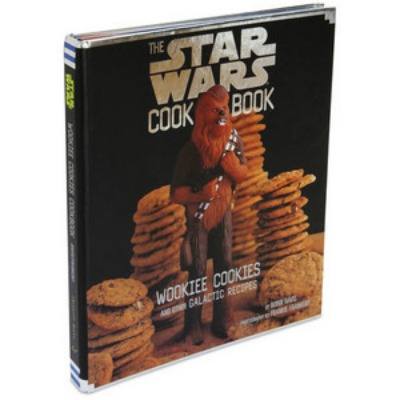 Cook for your loved ones with space-aged science that promises satisfaction!  $14.99

buys you 60 easy-clean pages that contain over 25 Star Wars recipes, like Tuskan Tater Raiders, or Greedo’s Burritos.  Invite people over and serve them authentic cuisine from their favorite movie! 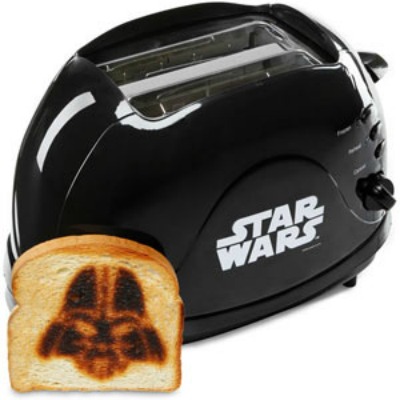 Turn ordinary toast into a force to be reckoned with by serving it with Darth Vader emblems singed into the sides.  Bread didn’t used to be something to smile about, but now, for $49.99

, it is, and you should smile as you demolish the dark side bite by bite.  This toaster will certainly make meals, especially breakfasts, more advantageous to you! 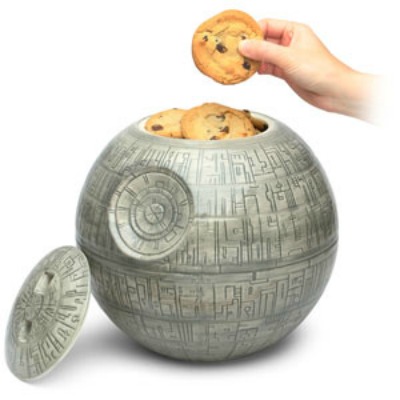 This is a humorous reminder of the disaster that could await you if you decided to eat all of the cookies that could fit into the Death Star Giant Cookie Jar.  This ceramic 12” x 12” cookie jar costs $49.99

.  This item is “an officially licensed Lucasfilm collectible.”  How does that saying go?  Oh yeah: “Come to the dark side … We have cookies!”  Be prepared to entice anyone at a moments notice by filling this useful Death Star with something delectable! 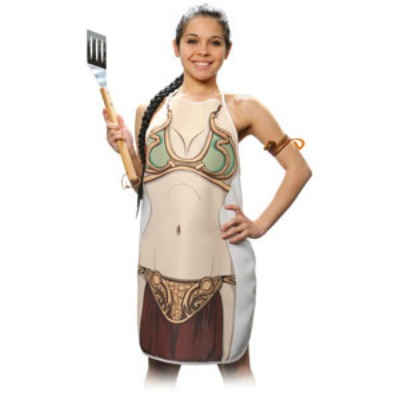 Your geeky other half will find you irresistible if you are cooking and looking like Princess Leia in this apron.  Get it?  Haha … You’re a slave in your own kitchen.  But, seriously, you don’t have to sport the buns, although it might be something worth trying …  Just put in his favorite section of movie magic and serve him some Darth Vader toasted sandwiches while wearing this apron and see where that gets you …  $24.99

may end up being a pretty small price to pay for this victory. 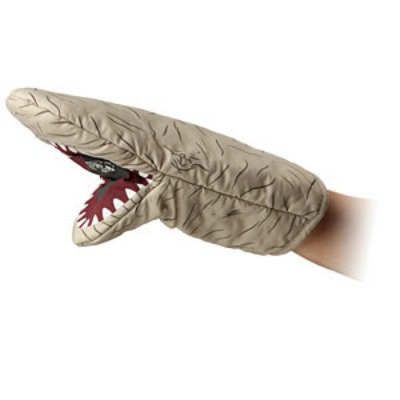 Star Wars Space Slug Oven Mitt will save you from burning your hands when handling hot commodities (so maybe he needs to wear them).  But, it also makes a great little puppet.  Space slug says to do the dishes! 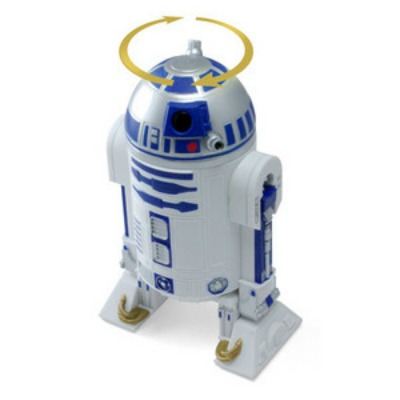 Sprinkle some tiny bits of peppery adorable onto every meal with this R2-D2 Peppermill.  Perhaps the most endearing character of the Star Wars movies is R2-D2.  His robotic attitude was somehow so well expressed.  Now he can help you express pure fresh-ground black-pepper flavor within your food every day for only $19.99

.  If you collect salt and pepper shakers, then this is a must-have for you, especially since it is a licensed collectible. 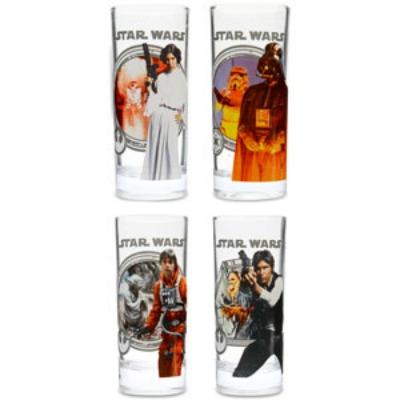 Star Wars glasses.  They can each hold ten ounces of rebellion.  These snazzy glasses will work perfectly for that Double-Date-Star-War-A-Thon that you probably have planned. 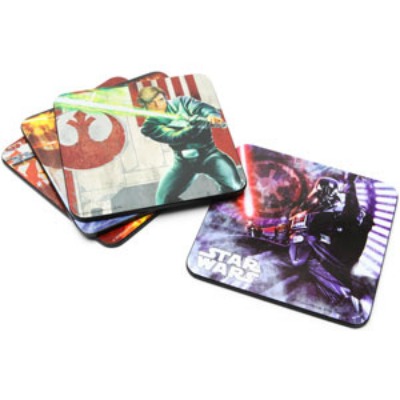 Be sure to place all those glasses on these awesome $8.99

Star Wars wooden coasters.  Details are important, so don’t forget the little things.  True fans take every opportunity to display their icons.  You are a true fan, aren’t you? 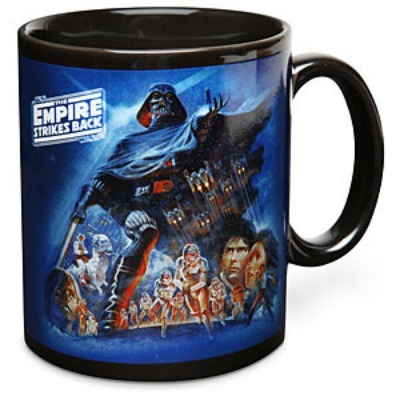 If you need some caffeine, then drink from this $8.99

coffee mug and reminisce about your favorite Star Wars moments.  The vivid design will give you something interesting to look at while you slowly start to align yourself with reality each morning.  Tactical missions can now be planned with more precision, because the force will be with you.  Consuming excessively large doses of caffeine are likely the closest we can come to harnessing any Jedi potential that we have.  Learn how to stay caffeinated! 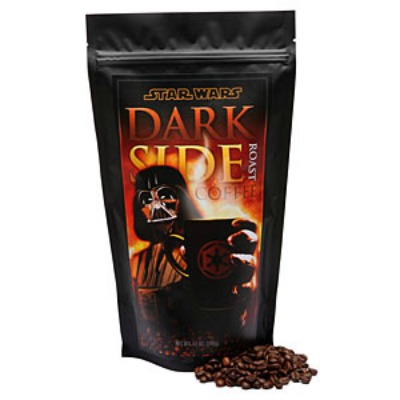 coffee in those mugs in order to best prepare for battle.  The dark side has the best coffee.  This Star Wars Dark Side Roast Coffee is evidence.  That’s their allure.  Caffeine is an addictive drug.  The bad guys are actually elaborate drug dealers.  All the clues are in the movies.  Perhaps you weren’t paying close enough attention … Get up early to drink that coffee with one of these alarm clocks. 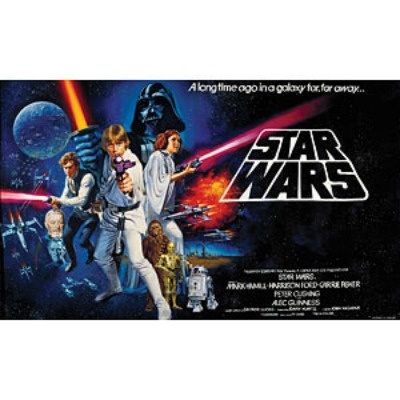 Sporting the leader of this Star Wars kitchen entourage would mean that you would be making a bold statement, but if you’re really a fan then no statement is ever really big enough.  This $89.99

wall art is really rather large, though, so you may have to clear some wall space.  This is no ordinary poster.  It is a vinyl window to another dimension!

So what if your friends think of your kitchen as a giant shrine to the almighty Star Wars, the greatest saga of all time … That’s exactly what it is (or could be).  Liberate yourself from the treacherous grips of monotony and imagine yourself to be “in a galaxy far far away … “