The Rowbike: An Ingenious Way to Burn More Calories

Some items that we use everyday seem like they simply can’t be improved upon. The bicycle, for all of its simple mechanical glory that manages to get us from point A to point B much faster than walking but under our own power, happens to be one of those things. Yet Hammacher Schlemmer shows us with this Rowbike that you can burn calories, enjoy the scenery, and stay on the move using the same functionality as a stationary rowing machine. 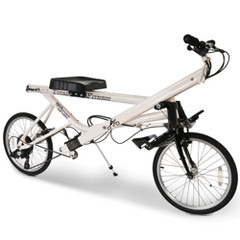 The “apparatus,” as the manufacturer calls it, provides a much more full-body exercise experience than what you might be used to with a more traditional bike. Interestingly, the rowbike was actually invented by the same person who came up with Rollerblade inline skates, Scott Olson.

The concept is pretty straightforward, as the two-wheeled machine is propelled by rowing with the handlebar, which subsequently transfers the power to the rear wheel. The real attraction of a bike like this is that you’re working just about every part of your body, with the bike engaging most of the major muscle groups. The bike is constructed from lightweight aluminum and the seat is padded and glides smoothly along the frame as you ride along. It will definitely take some adjustment if you are used to a traditional bike, but once you get the hang of it, you are sure to love it. The cost of the bike is high, but that’s to be expected given the more complex machinery and solid frame. In total, you are looking at $1400

For other unconventional ways to bike, consider the Energysport, which manages to harness the power from your bike wheels and power various gadgets with it. If you have an old bike that you need to get rid of after picking up a row bike, you can make something like this gear crank wall clock to give it new life.