Leo Mattel has recently turned to making some Barbie collectibles, and the latest on the list is the Star Trek Movie Barbie Assortment Set. This set contains three dolls that are dressed like Captain Kirk, Mr. Spock and Lt. Uhura. Quite an impressive collection, with a great eye for detail, this is sure to be a big hit among Barbie fans and Star Trek fans alike. 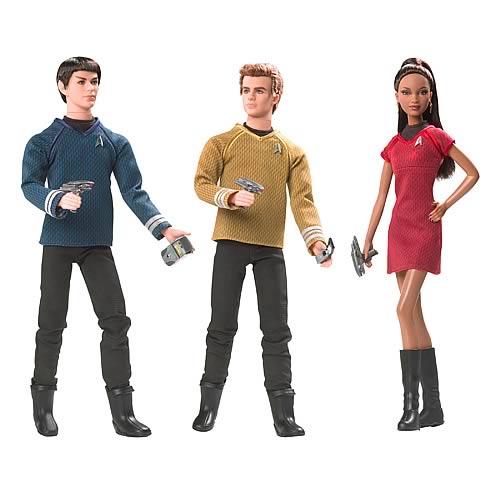 What I like best about this collection is that it manages to capture the essence of Star Trek without losing any of the Barbie-ness about it (ok Ken-ness as well). You can almost picture a babble of Klingon combined with Captain Kirk saying “Beam me up Scotty”. The clothes are modeled on the 2009 Star Trek movie, and is complete to the smallest detail.

The pack contains three individually packed dolls, and each of them is just over 11 inches tall. The uniform and accessories are all included. The only thing missing is the Starship Enterprise, and maybe the rest of the crew, but collectors won’t mind that as long as they get a piece of the action. The Star Trek Movie Barbie Assortment Set retails at $151, which is about $50 per doll, which is fairly reasonable for something of this quality.

If you liked this product, be sure to check out the Titanic Barbie, Barbie Doll Twillerbabies, the Barbie Doll Foosball Table.