When you think of Star Trek, you think of Spock and the USS Enterprise and dozens of popular culture references. Well, now geeky girls can pay the ultimate tribute by painting their fingernails symbolizing Star Trek!

That’s right, the television series that has captivated the imaginations of millions of people worldwide has been immortalized on fingernails, proving that girls love Star Trek just as much as their male counterparts. 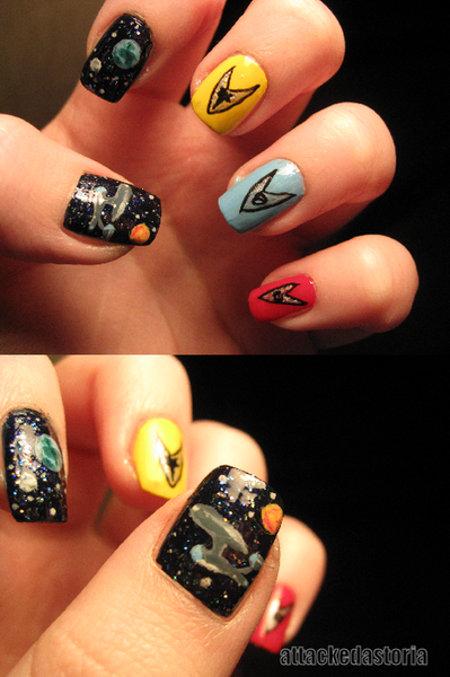 Painting your fingernails with the Star Trek theme is wickedly cool and it is nothing like the regular way of painting your nails in various bright colors or in a single color scheme. Painting your fingernails like this is probably as difficult as it looks, but the final result is so totally worth it. Janie who has painted her fingernails with the Star Trek theme in mind, has made Star Trek accessible to the fashion conscious. She has painted each nail in a unique style, befitting Star Trek. The thumb has been painted with a dark blue universe background and has USS Starship Enterprise, the infamous Star Trek ship on it. The second finger has the earth on it and a number of smaller planets and heavenly bodies, while the remaining three fingers are all symbolic of the communicator badges that the crew members of the Starship Enterprise wear, with yellow, blue, and green as a background colour. The Despicable Me Characters on the Nails is one cool nail art to look out for.

So go ahead, experiment with your nail polishing skills and attract any geeky boy you want! Hungry! Try out the Hamburger Nail Paint.