The Despicable Me Characters on the Nails

The plan to come up with 365 nail designs in 365 days is a task in itself, but the Daily Nail blogger is making it look easy and quite fun. And this time the theme is the comic animation movie Despicable Me. Taking on the characters of the movie as the inspiration for her new design, the nail designer has given innovation in the beauty industry a whole new meaning.

Though the designs are nothing more than the faces of the characters in the movie, they look absolutely fresh and adorable and the fun and frisky use of a variety of colors does make them eye-catching. On the nails of the fingers are painted the minions and on the nail of the thumb is the silhouette of the lead character of the movie, Gru. 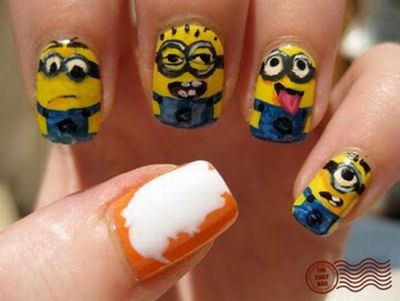 For the base of her fingers China Glaze Happy Go Lucky has been used and Zoya Jancyn is for the base for the thumb. The minions’ base has been done with Pure Ice French Kiss and to give the effect of jeans that minions wear in the movie, a mixture of Pure Ice French Kiss and Orly Snowcone has been used. Apparel Hassid, American Apparel Factory Grey, and Pure Ice French kiss have been used to design the goggles, buttons and the chest logo. The same shades have also been used for the eyes and the pupil as well. To give the tongue a proper shade a mixture of Essie Foot Loose, American Apparel Cotton and CND Electric Orange with a hint of A Beautiful Life Poison have been used and the final result looks splendid. The Gru silhouette is done with Sally Hansen Professional Lavender Cloud to give it a little edge. The finishing touch is provided with two coats of Seche Vite top coat which give a shiny varnishing effect to the whole design.

The idea of nail art using movie characters as inspiration is very different from what we normally see but also something which comes like a breath of fresh air. The minion designs are lively and they owe their fun-loving demeanor to the abundant and clever use of a variety of colors. The Gru silhouette on the other hand lacks the spark that was expected from it. Rather than a boring silhouette the lead character of the movie should have had its face painted on the nail. Difficulty in the designing Gru’s face can be the reasonable explanation for the silhouette design instead. But all in all the tedious work on the minions has to be lauded for the sheer effort. Something that all the movie-lovers and nail art lovers are going to be crazy about, the Despicable Me characters are sure to be the new rage thanks to the Daily Nail!

Are you curious to know more about such products? Check out these: Hamburger Nail Paint and Monkey Nail Dryer.