The Scroll Dress for the Fashionable Star Wars Fan

Everyone loves to dress up in fancy, geeky outfits once in a while. It’s one way of living out your fantasies and giving free rein to your imagination.For those of you who love dressing up in geeky attires, there is this absolutely amazing Star Wars dress. It is indeed a simple idea of putting the opening scroll of Star Wars fame on your dress front, which can give you the optimum geeky effect. In case you like to go in for extra props, do go ahead and emulate some geeky ideas from the original movie’s scroll. 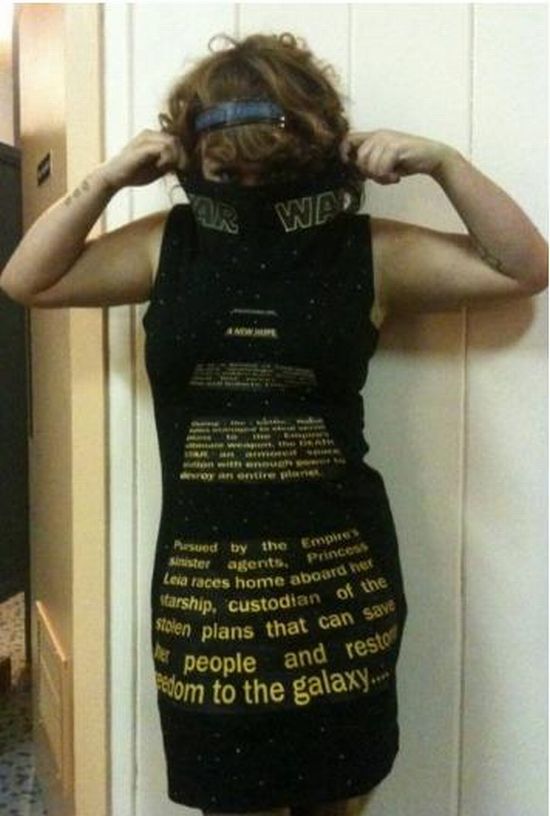 Chris Eng has always been a geek and also a writer of renown. He invests a lot of time into writing for his blog Geek Unplugged. Incidentally, Star wars was the first movie he remembers having viewed in a theatre, at the very young age of four. And he opines that, he has been hooked on to Star Wars and geeky outfits ever since. It’s little wonder then that he tried out the Scroll outfit on his friend, Chenoa.

Chenoa models the superb Star Wars scroll outfit and her imagination and geekiness has taken her to the heights of even donning a head band which reads” A long time ago , in a galaxy far, far, away….” reminiscent of the famed Star War movie. She looks awesome and trendy in her star war scroll outfit. Chenoa happens to be a hair dresser at the Beehive in Vancouver, and is extremely good at her profession.

Those who are truly hooked on to Star Wars need to sit up and take notice of this geeky outfit. This dress is truly “out of the world” and is very innovative too. Chenoa has expertly managed to portray the dress to look both stylish yet geeky. It goes without saying that this amazing Scroll outfit is trendy, hot and chic too.

Lend wings to your imagination and try out this trendy yet geeky scroll outfit and make heads turn in your direction, giving you appreciative glances.  Be trendy, different and be the cynosure of the party! It would do you good to be trendy, geeky and different at times, to get you out of the monotony of every day life. So, what are you waiting for? Get ready to indulge yourself this weekend !

May be this is a little weird. But then one needs to get experimental in life. What do you think about these –  Rubik’s Cube Dress and Musical Circuit Dress?