The City Lights Globe is a rotating globe that illuminates to show how the cities of the world look during night time, from outer space. Amazingly, the globe glistens with a soft white glow in major metro cities spanning Eastern Europe and North America. It shows sparsely lit areas too, scattered through out Africa and Russia. The city lights get automatically illumined in low ambient lighting and they dim automatically when the globe is exposed to light, thereby displaying a multi color political map with topographical shading and place names for major cities, countries, and massive bodies of water. 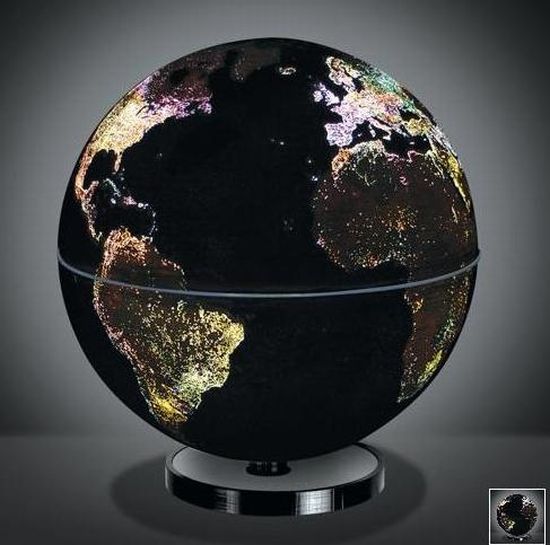 This splendidly fascinating ten inch globe rotates automatically on a mirrored base that reflects Antarctica and the surrounding bodies of water. The City Lights Globe very effectively captures the ethereal beauty that surrounds cities around the world at night as dusk falls, and the city responds by lighting up buildings and streets. If you even find yourself overlooking a city skyline at dusk, you would be able to have this ethereal experience. But for those of us less fortunate enough to find ourselves placed at such vantage points, the globe is the perfect solution. It helps you to witness the way the earth lights up at night.

The City Lights Globe revolves upon its base replicating the revolution of the earth. As it revolves, the cities of the world light up giving you an uncanny sense of viewing that part of the earth from space. Even though the northern hemisphere is thick with lights, certain parts such as Africa are sparsely populated with lights. This provides you with an accurate depiction of the earth and its cities.

Apart from offering you a view of the globe from space, the City Lights Globe is one of the most versatile toys ever. Apart from being educational, this toy is very fashionable too. It elegantly decorates any room, home, or office and helps to brighten up the space that it occupies. This makes for a great conversation piece too.

Using the City Lights Globe and gazing at Earth gives you a feeling of the planet being lit up brightly like a Christmas tree. With its electronic induction system, the globe appears to float above its base, gently revolving to depict night and day. It very accurately depicts the night time darkness of North Korea and most of Africa. Simply stated, the globe can show both day time and night time simultaneously when the globe rotates too, by itself.

The City Lights Globe is placed on a tilted base, and it automatically revolves slowly giving a 360 degree show of the world by day and the world’s lights at night. The base is 5.5 inches by 0.75 inches  and weighs almost a kilogram. The revolving mechanism is powered by a 110 V adapter and it is a good physics toy for kids aged fourteen and above.

The City Globe does not require any batteries but needs to be plugged in to an AC. It is available at
$89.95

. So, the next time, when children ask you for toys, make sure you get them toys such as Magic Spinning Globe and Sesame Street Deluxe Chess Set.