Until the twentieth century, very few toys were possessed by kids, which they considered precious. Those were the days when mere survival was everyone’s concern and hence, there was not much time for amusing oneself. In short, items and things were not meant to be had fun with. It is not sure what the first toys were during prehistoric times, but a lot of oddly shaped rocks and sticks were used to keep young kids busy. Basically it was wood that was later used in the ancient ages to make toys by the Greek and Romans. Such toys were passed on from generation to generation. As time passed, the quality of the toys gradually increased and with the advancement in technology, the invention of interesting toys exploded and still continues till date. By the twentieth century, toys were figured out to be the most popular form of amusement for kids. Also, using the battery technology in making toys has changed the way these work. The basic principle is the same, but it is just that toys now relying on batteries have replaced the clockwork and string technology used long ago. 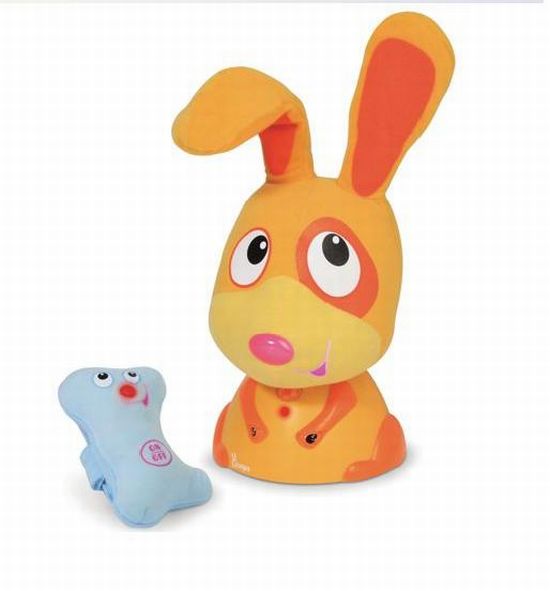 Besides toys, pet dogs are another great thought to keep kids company. The only issue faced is about training, maintaing, and keeping kids safe from them. But they flow out unconditional love with those adorable puppy eyes following one around everywhere. However, it’s a hassle to look after them especially since they need to get trained as to the correct place to poop and pee.

This is exactly why Hammacher Schlemmer has come up with the Follow Me Puppy which is as entertaining as a real pup and with no poop to clean about it. It appears really cute with a smile that is friendly and has floppy dangling ears. It follows the kid around while singing and talking, without having to be bribed for with treats. The puppy follows one while it is attracted by an infrared bone.

Well, the package comes with a bone that transmits infrared rays to which the puppy responds. The bone containing the transmitter has a polyester casing, which is non toxic, and it can be slipped and hooked onto the child’s wrist secured with hook and eye clasps. The puppy will cry out the child’s name begging it to come and play, when it cannot see the bone. The child’s name has to be recorded initially using the in-built microphone. The puppy will roll over on flat and smooth floorings avoiding obstacles with the help of two wheels and a caster. The puppy has in-built infrared sensors that can sense the rays from the bone up to 12 feet away. At a price of $49.95

, it requires four AA and two AAA batteries to function and while it is best to go eco-friendly these days, one might as well get rechargeable batteries.

You can also take a look at Robotic Dog Toy, but if you don’t like puppies go through Little Blue Pony.