The present world is an electrified surrounding. To make post day time a cordial place to live in and bring out the light in the darkness is a blessing that lamps have bestowed upon us. Different adaptations of lamps have been present all through history that dates back to almost 72,000 years ago. Until almost the 18th century, desk lamps were mere oil lamps. Animal fat was initially used as a source of fuel to make light and once pottery techniques came into limelight, people started making lamps of different shapes after which followed metal lamps. Pretty striking and tasteful lamps came into existence when the Greek started experimenting with terra-cotta and these lamps replaced torches. And with the invention of central burners, there was a great improvement in lamp making. Towards late 17th century, gas lamps started to get commercialized. And early 19th century saw the invention of the incandescent light bulb by Thomas Alva Edison. This started replacing the gas lamps. And it is specifically because of this invention that table lamps started to get popularized. 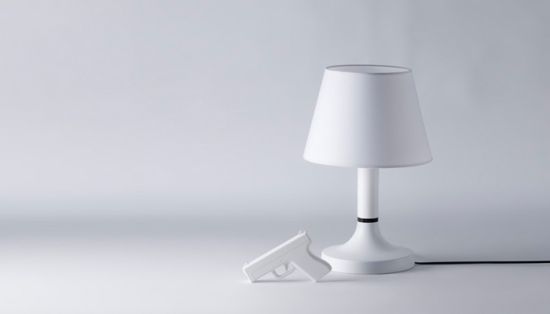 By 1930s, almost every household possessed a table lamp and it has been becoming only more and more common with each passing day and has almost become a necessity. And today, one finds such a wide range of lamps in contemporary as well as modern styles. One is sure to find a lamp for any kind of milieu that can be imagined. And these are not only on the basis of the strength of the light it can let out, but also for its functionality and style. 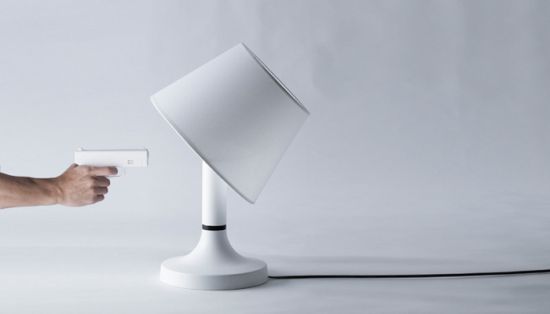 And here is Japanese design company, Bitplay INC, with the most awesome of all inventions, the Bang! The incorporation’s focal idea is to involve a little humor into interacting with everyday objects like desk lamps. It is always fun to play around a little with these objects while still maintaining their elegance like eliciting magic in everyday living. 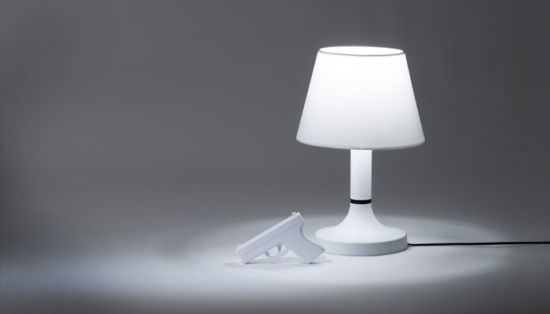 Bang! It looks like any normal desk lamp with a white lampshade, but this set comes accompanied with a white toy gun. The basic ideology behind this invention is to be able to turn off the light on the lamp by simply pointing the gun towards it, pulling the trigger and shooting. Once aimed well and shot, the light turns off and the lampshade topples and knocks over to the side at an angle like playing dead. And to bring back the light on, bring the shade back to its normal position. 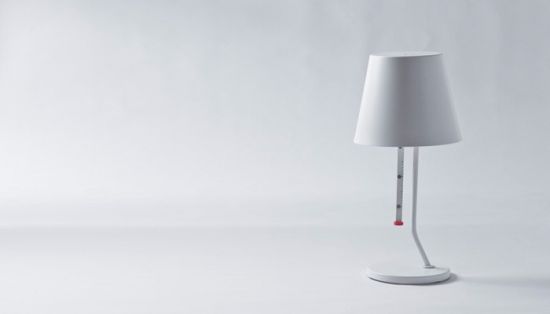 This lamp is great for those who have decided to go against clappers to turn off lights that are across the room. Lighting choices in and around places are no more boring, plain, or uninteresting with such inventions as the Bang ! 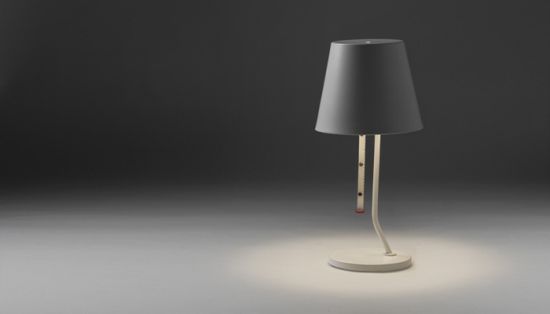 This lamp is a clever and smart invention that is creative and playful while at the same time, it serves its purpose too. This product might probably bring out the assassin or sniper in you. And video game addicts can keep practicing with this to improve their aim.

Unique designs such as those of Pouring Light Lampshade and Ghost Lamps will definitely want you to get one for your homes too.