It seems odd to think that a pegasus would need to take the environment into consideration. I mean, flying mythical creatures can’t have that much of an environmental impact…or can they? With this solar pegasus, you can watch your favorite flying horse zoom through the air or make him a bit more everyday as a carriage beast of burden. Either way he is powered by the sun, so that has to count for something in my book. 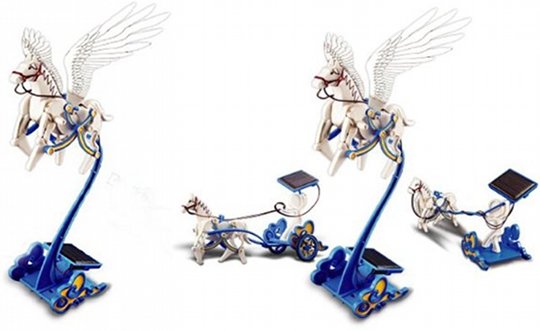 Looking over the models, the pegasus won’t exactly be flying through the air like a bird. Instead he’ll be tethered to his solar powered platform, but no to worry. Pegasus can be setup under three distinctly different arrangements. You can set him up as the classic pegass flying through the sky, a circus horse riding endlessly in circles to the entertainment of kiddies and people too scared for the roller coasters, or you can turn his solar powered platform into a carriage horse happy to take people on a tour of major metropolitan areas. The best part? The choice is entirely up to you, and the model appears to pull them all off in a reasonable fashion.

This also segways nicely into an afternoon with the kids, as this pegasus is a build-it-yourself model. You can help the little ones get some work in with their hands and hopefully end up with a very cool toy as a result. Such versatility doesn’t come cheap though, as this solar powered horse clocks in at $56. Shipping will tack on an extra $19.

If you are looking for some other animal fun, I can point you in the direction of the classic My Little Pony done as an art collectors delight. You can also peek at the dark side of taking a bath with these six tiny colorful devil duckies.