I can honestly say that I have never had much of a sweet tooth. Frozen delicacies like ice cream, milkshakes, and so on I definitely enjoy, but straight up candy has never been my empty calorie of choice. Still, there are plenty of consumers out there who love themselves a tasty, sugary treat, and you don’t get much more sugary than the world’s largest gummy worm. That is likely more sugar than your body has room for. 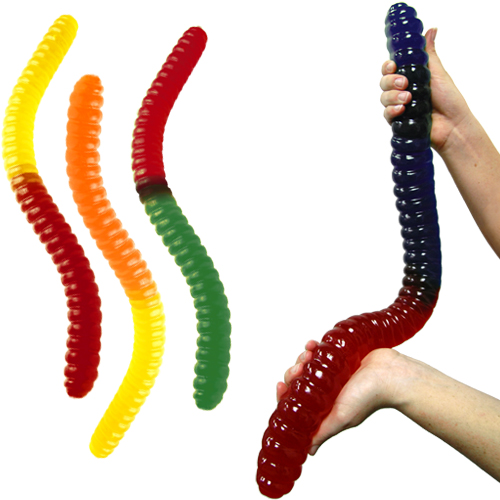 This monstrous gummy worm may not look very appetizing, but there is a whole lot of goodness in there. It measures two feet long and weighs in around 3 pounds. Considering that the worm contains roughly 4,000 calories, I think it is fair to say that you should not take on the task of eating it without a good number of friends. Thankfully, you at least get to choose one of 5 blended flavors, including lemon and orange, green apple and red cherry, pineapple and red cherry, blue raspberry and red cherry, or orange and blue raspberry. Just be sure to clear the flavors with your partners in crime before you order it, because this titanic of taste does not come cheap. The world’s largest gummy worm clocks in at $27.95, which is expensive for your average piece of candy. Then again, this definitely isn’t your average piece of candy, so expect to pay more.

If you are still in the mood for something sweet but you would rather not become diabetic in the process, there are plenty of other options here on Gadgether. You could have a much more moderate treat with the added benefit of your favorite Japanese cartoon character on the top with this Hello Kitty Pez Candy set. You can also try recreating the carnival experience in your very own home with this Candy Floss Maker.